Sound and Frequency comparisons in Studio and Live

Sound and Frequency comparisons in Studio and Live

A Conversation With Sound – Healing, Tech, and Source

We have been hard at work creating new sound designs, focusing on a few key elements. Some are for fun and entertainment, and some are for sound healing and sonic clarity. The newest findings of the past month at Soul Graffiti Studios is the importance of the source. In a recording, there are many tricks of the trade to make an instrument sound better than the original. However, often our ears are tricked by compression, Db (volume), or equalization that made us think it sounds better. As in life, you can do exactly what you want to do to get to the point of the purpose or sound you look for by finding the most direct source of your intention.

Here is a look into some recordings with details on mics and placement. Plus, below we have some geeky charts on sound using a comparison of frequencies and energy consumption where I’ve been hypothesizing on the concept of how energy sucking frequencies and harmful frequencies, or some that could be notched out easily, may lead to clarity in a mix and more space in the mix. They may be relative. Mixing this way could also allow for your speaker to operate more effectively.

We were lucky enough to use a pair of Neumann U87 microphones from 1963 for vocals and guitar recordings. We found that the sonic clarity of the microphone us to use fewer post-production tricks of EQ and compression that often lifts the right volumes for clarity. The mic itself is clear enough, and if anything, we drop frequencies out to allow for space of other instruments, rhythms, and speaker movement to not overwork.

The biggest difference is shown when we listen back through the clear Nautilus 802 speakers in Studio A at our studio. These speakers are rated from 30 – 30K Hz and emit frequencies our ears aren’t able to hear, but our body can feel. It’s one of the closest examples of a speaker that may emit the right frequencies to show the sound healing work when people start using rhythm and frequencies in an intentional way; something we intend to do with music underlying the entertainment and joy aspects that we know music is good for.

On drums, we used our set of Audix drum mics. We replaced the overheads with some industry standard DPA 4006 condensers. we faced them a bit to the back of the room, not directly down on the drums. The effect created more room sound and used the omnidirectional focus of the microphone to capture a balanced and spacial effect of the drums. This proved superior compared to placing the mics downward on the initial trial.

Bass went direct and worked great. I think we’d like to eventually re-amp the bass through some Avalon VT-737sp or something comparable to warm it up. We’ve found that the digital versions have been comparable in Ableton using some VST’s. We are still in the R&D phase of this which is exciting and non-definitive currently. We hope to have some more information on the best outcome very soon. Overall the bass is sounding great, thanks to Fred Doumbe’s incredible playing and technical ability. Once again it’s a true testament to having a solid source. Whether it be the musician, the instrument, or the microphone, the source matters.

Frequency and Energy use comparison

In the past 10 years, we’ve been helping to develop technology to advance alternative sources of energy for live concerts. The most unique being Pedal Powered Music, offered by Rock The Bike in Oakland. Our reason for using the K12.1 QSC model instead of the K12.2 current model is because it doesn’t have any computer or extra power needs of the newer model. It has a variable power supply which allows for AC or DC connections, which is great for having a direct connection to anything that gives variable input up to 240v, used for easy European plug transitions. It comparatively works great with the direct connection to the DC output of a stationary spinning Electric Bike hub motor wheel power source. Unfortunately, the K12.1 model is discontinued and the only way to acquire them is in the used speaker market.

We compared the K12.1 to an old JBL. Neither had any computer source of extra power use as newer models. admittedly, the JBL Eon 12 that we used is an older model and we’d like to try a newer model with the same test. The speaker is great due to the same max Db ratings and size of the speaker and we know that it also is the older version of a comparable brand.

The test was us playing at the speakers’ max volume of roughly 126 Db all frequencies, starting at 0 Hz and going all the way up to 20K Hz, frequencies that become inaudible to the human ear. Our comparison was definitive in two ways. The QSC K12.1 showed better clarity in sound and watts usage. 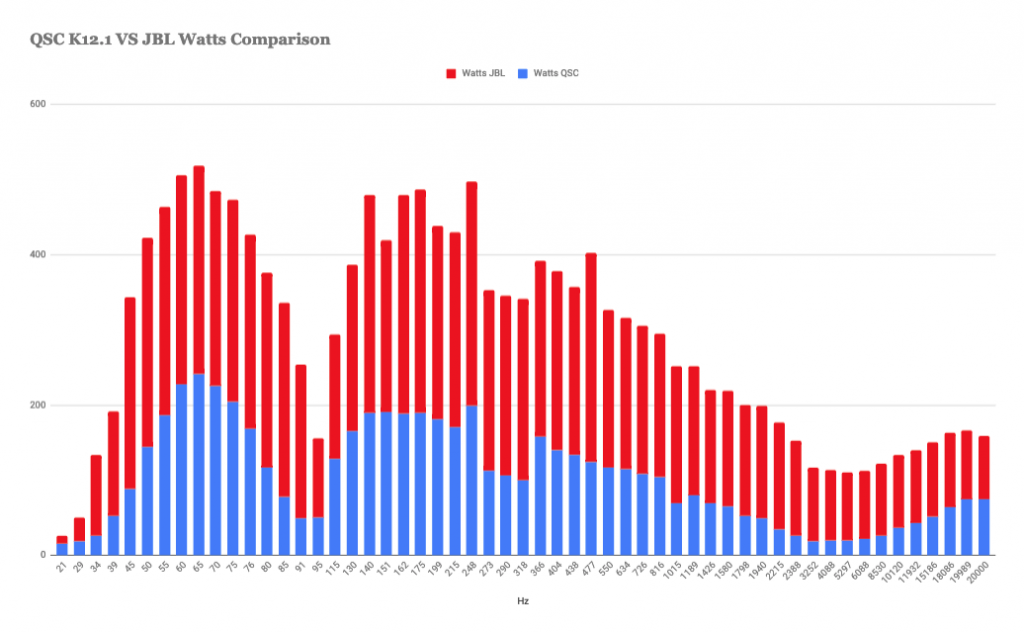 Sound and Frequency with Watts usage

The JBL took over double the power usage. Notice how the sub frequencies jump in watts usage from 39 Hz to 91 Hz, the measured frequency. Some inside rooms often need a notch filter at 60 Hz. This could allow for some power conservation and sonic clarity. You can roll off the extra power consuming frequencies to save on power on the monitors or mains. It’s important that you don’t degrade the sonic clarity for the performers or the audience. Offer a landscape for the speaker to better reflect what the listener wants to hear. On a positive note, there may be a way to conserve some power if you do a Pedal Power show, solar-powered show, or battery power of some sort.

LIVE SOUND AND WHY

Overall, we used this experience as a way to connect to our own inner geek. We learned about how power conservation and frequency are relative. If we look at power usage for a full day concert, you may use more power to make your morning toast and coffee with your toaster and electric water boiler. Lastly, alternative power concerts won’t save the world. It’s a great way to engage and educate the masses in a fun learning environment.

SHAKE YOUR PEACE! release and direction

My personal goal is to find a concert that engages and educates. I’d like to create the capacity to teach sound healing through what music and frequencies are emitted; to work on the psycho and emotional levels of the self. Probably the closest example of this would be SHAKE YOUR PEACE! Further, create a concert with the softest sounds like Tiny Home and the ground shattering rumble of WHUP music.

Gabe Dominguez the mastermind behind this project that is about to release an album in 2019 is also one of the main masterminds behind Pedal Powered technology. Rightfully so, the dream would include the amalgamation of both sides of the Whupestra. The ecotopia dreamer and the dynamic sonic clarity of a revolution in music. Hopefully, this allows us to tap into the best intentions of ourselves.

That’s it from Soul Graffiti for this article on Sound. I hope that you see ways to use this information for Sonic clarity, Energy clarity, and more intentional uses of sound. Most of this research is a personal passion to find the best form of myself in music. It also is to clearly combat the forces in the world that use the same frequencies for harm. Sound is powerful and may you find your best intentions with using it. It is your voice and your instrument that surrounds you and is within you; therefore, may the force be with you!

Thank you to contributions from Sam Ward for his specialized gear and awesome ears for sound. Also please welcome him to the team at Soul Graffiti. He is one of many options for engineering your next album.