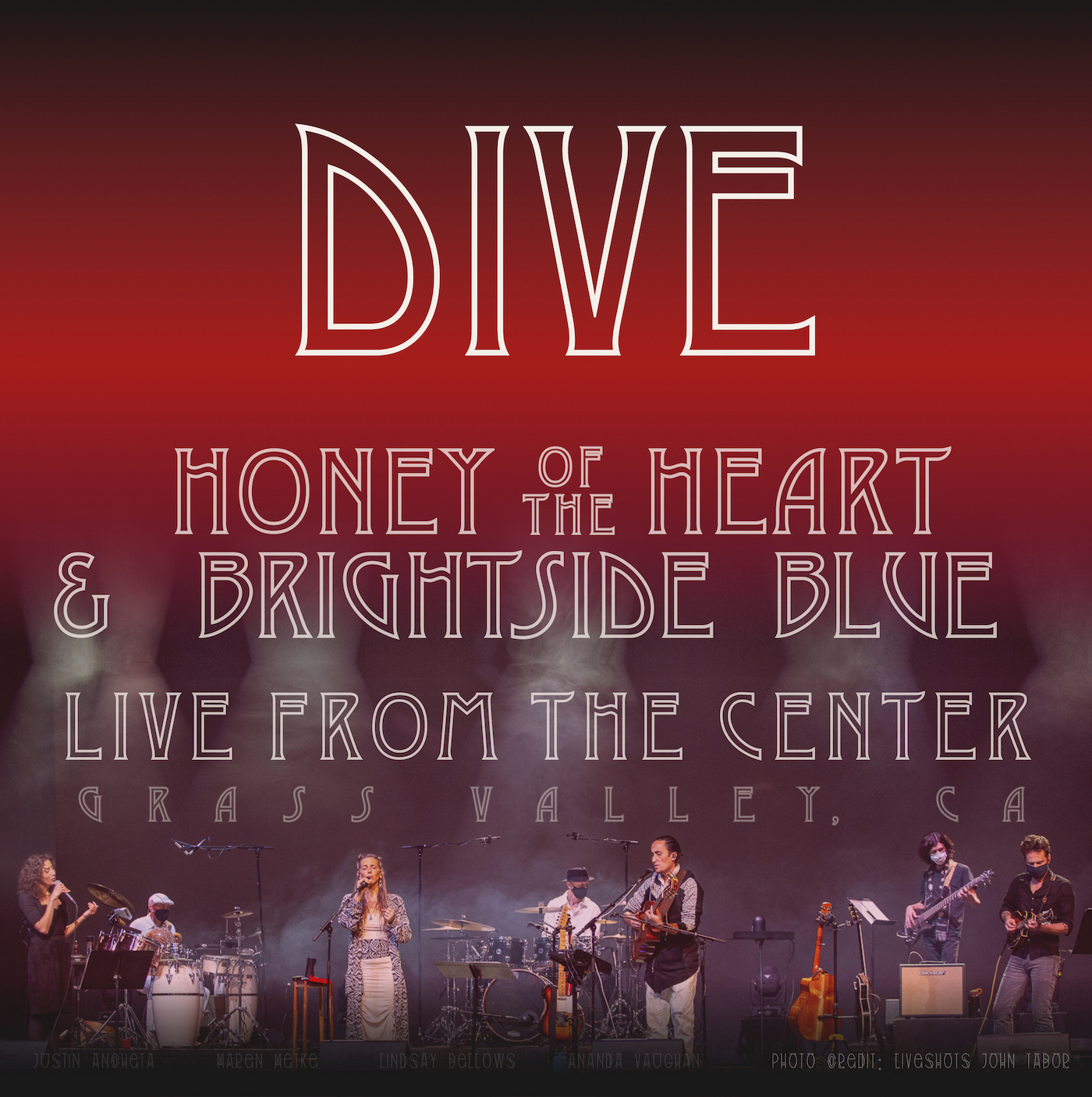 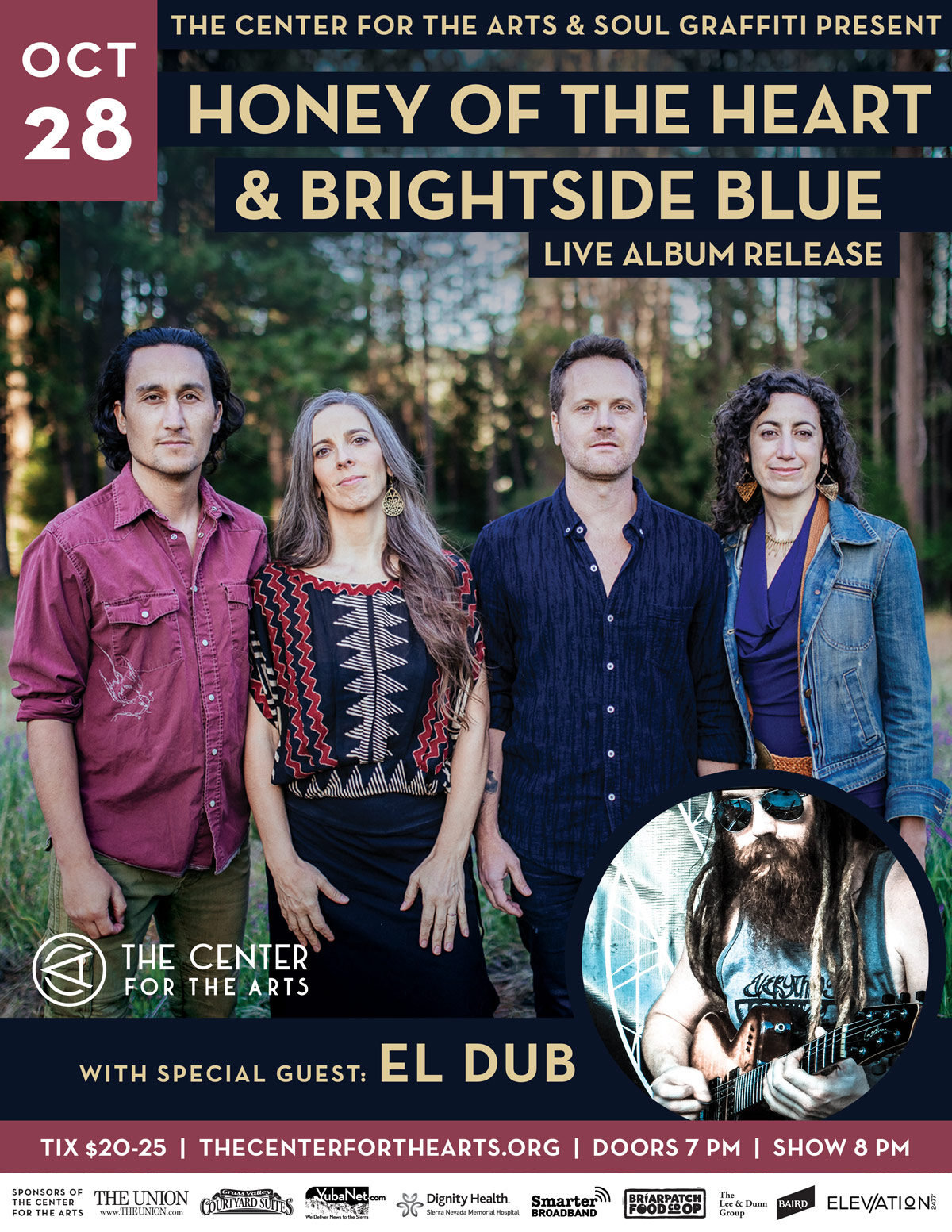 [Grass Valley – October 28th, 2022] Honey of the Heart and BrightSide Blue team up for a once-in-a-lifetime show in their hometown, Grass Valley, CA. The groups’ budding collaboration throughout the pandemic culminates in the release of their “Live From the Center 2021” album with thirteen songs, both originals and covers, filled with world rhythms and heavenly harmonies. The album also comes with a full 5 angle video remixed and mastered by Soul Graffiti Productions & Grammy Award-Winner, Oz Fritz. Watch it now at https://bit.ly/3KsJq7J

“Live From The Center 2021” is the first recorded collaboration of Honey of the Heart and Brightside Blue as a Super Band. Both groups toured for years as duos, occasionally inviting other instrumentalists to join as guests, but the power that comes through when they all take the stage together is unparalleled. Since launching the combined music group earlier this year, they have been featured at multiple festivals and stages across the West Coast including Relaxpansion Festival in Ashland OR, Common Vision May Festival, California Worldfest in Grass Valley, CA and Port Angeles Concert Series on the Pier in Port Angeles, WA.

Talent buyers, event producers, community members and strangers alike continue to express their ardent astonishment at the awesomeness of this Super Band.

Executive Director of the Center for the Arts, Amber Jo Manuel, shares: “This group was a hit at WorldFest. They played multiple stages throughout our four day festival including a spot on the main stage with some top artists from across the globe. They are always loved by the audience, have an excellent following and bring great vibes.” Tyler Blue, Director of Music for the Crazy Horse Saloon said: “The term ‘more than the sum of its parts’ was invented for a group like this. It’s rare to witness this level of heartfelt, creative intention come to fruition.”

The level of enthusiasm from fans at this early stage in the group’s union foretells a spectacular road ahead. While there is no telling exactly how it will unfold, the chances of crying, laughing, or dancing wildly during a live performance is nearly guaranteed. The group delivers tight folk-soul-roots-world/flamenco sounds, compelling grooves and wailing solo-spiked jams – all offered in a spirit of care, humor, and hopes for a better world.

These two groups found harmony in the dissonance of the pandemic: Every week they met safely outdoors to support one another and keep spirits high by learning each other’s tunes. Their story of resilience through hard times is a testament to the healing power of music and community. Honey of the Heart and BrightSide Blue were just featured on a podcast called “Neurons To Nirvana” where both bands speak candidly about their deep connection as friends and musical allies.

You can catch them live at their Album and DVD release show at the Center For The Arts in Grass Valley CA on October 28th, 2022 from 7:00 PM  to 10:00 PM. They then plan to do a run of release shows throughout Northern California, so keep your eyes peeled for these sweethearts: Honey of the Heart & BrightSide Blue are coming your way soon. The Center For the Arts is located at 314 W Main Street, Grass Valley CA.